Bite-sized reviews of the LGBTQ books I’ve read in the past week. All titles are linked to their Goodreads page.

Between January 27th and February 2nd, I read: 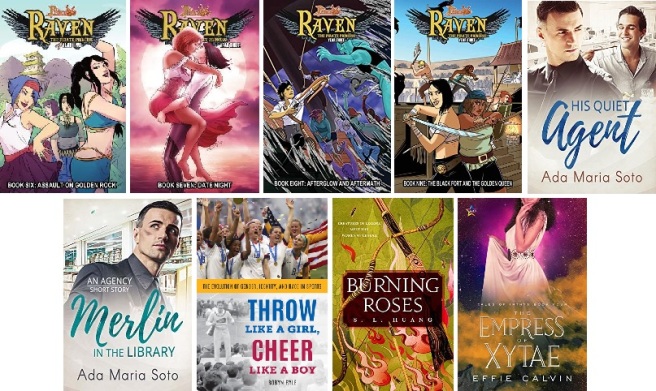 Raven the Pirate Princess, Vols. 1-9 by Jeremy Whitley, Nicola D’Andria, Xenia Pamfil, Christine Hipp (2018-2020)
Genre: fantasy/graphic novel
Audience: young adult
Queer rep: Multiple lesbians and bi women, an ace girl, a gender-questioning character, multiple f/f relationships, and probably more
Thoughts: Raven is a spinoff of the Princeless series, and although it can be read independently both of these series are a great deal of fun so why not read both? Raven was raised to take over her father’s pirate fleet, but she was cheated out of her inheritance by her nasty brothers, Crow and Magpie. She’s out for revenge and to reclaim her place on the seas, but first she needs a crew… Year One (vols. 1-3) follows Raven and her crew as they adapt to each other and start to seek out Raven’s brothers; Year Two (vols. 4-6) are full of action as they gear up for a confrontation with Magpie; Year Three starts off with an interlude (vol. 7, Date Night) as the crew enjoys some shore leave and relationships – both romantic and platonic – further develop, before everyone is brought harshly back to reality in vol. 8. I read all nine volumes in a row, rereading 1-5 before diving into the new-to-me 6-9, and this is definitely a series that goes from strength to strength. I liked every single volume, but 8 and 9 really had me on the edge of my seat. I’m really looking forward to volume 10, which hopefully will actually be forthcoming – this series and the original Princeless have both been plagued by publication delays and Action Lab withholding payment to the artists, so their future is a bit uncertain as far as I know.

His Quiet Agent and Merlin in the Library by Ada Maria Soto (2017, 2018)
Genre: fiction/romance/novella
Audience: adult
Queer rep: The MC is demisexual, the LI is asexual, a lesbian side character
Thoughts: Arthur works for a secret government agency, but he’s no secret agent: he spends his days writing summaries of field reports that he suspects no one actually reads. When the promotion he hopes for turns out to be a lateral move – the same job on a different floor – his supervisor bluntly tells him no one knows who he is, and he needs to make friends and get noticed. Arthur’s attempts to be friendly with his new coworkers are all awkward, and being known as a creep is not exactly what he’s going for. There’s one person with worse social skills than Arthur, though – Martin, who is so disconnected from the office culture that the others have nicknamed him The Alien. This is a quiet, character-driven story with two complex people navigating emotional intimacy, and I enjoyed it immensely. I was excited to see the follow up Merlin in the Library, which is a short story about Martin that basically serves as an epilogue to His Quiet Agent. I’ll definitely be looking at Soto’s other works as well.

Throw Like a Girl, Cheer Like a Boy: The Evolution of Gender, Identity, and Race in Sports by Robyn Ryle (2020)
Genre: nonfiction
Audience: young adult
Queer rep: trans, intersex, gay, lesbian, and bi
Thoughts: Did you know cheerleading was once strictly a boys’ sport, and head cheerleaders were considered as manly as football quarterbacks? If you want to know how and why that changed, this is the book for you. Why are some sports considered masculine and some feminine? Why are there more openly lesbian athletes than openly gay ones, and does that mean lesbians are really more accepted in sport? How does sex segregation impact intersex athletes, and is it really a universal truth that men are better at sports than women? Did you know there are some endurance sports where women routinely outperform men, such as open water swimming? How does racial identity impact all of the above? And should athletes speak out about social justice issues or “stick to sports” – and what does sticking to sports really mean? Have sports ever been apolitical? This is a really interesting examination of gender, sexuality, race, and social justice through the lens of sports, and since it’s written for young adults it’s extremely accessible without being watered down – I would wholeheartedly recommend this to adults as well.

Burning Roses by S.L. Huang (2020)
Genre: fantasy/novella
Audience: adult
Queer rep: wlw protagonists
Thoughts: Rosa and Hou Yi the Archer are middle-aged and no longer as strong and agile as they were in their youth, but they’re still formidable, especially when working together. When deadly sunbirds target a nearby farming village, it’s Hou Yi they run to for help, and soon the two women are tracking the sunbirds across the countryside – and being tracked in turn. The attack wasn’t a random one, and as they travel they share the mistakes from each of their pasts that has led them to this point. This is very broadly speaking a mash-up between the Chinese fable of Hou Yi (gender-swapped here) and western stories like Little Red Hiding Hood (Rosa), Beauty and the Beast, Goldilocks, etc. but it really focuses on the inner lives of Hou Yi and Rosa more than anything. I was a bit confused when I started reading this because, although I didn’t see it mentioned anywhere in the back copy etc. Rosa was first introduced in the short story Hunting Monsters (2014) and its sequel, Fighting Demons (2015) and there are quite a few references to characters, events, and worldbuilding from those stories in this novella. You can definitely read this without reading the stories but if you have read the stories it fleshes things out more and provides some nice background.

The Empress of Xytae by Effie Calvin (2019)
Genre: fantasy/romance
Audience: adult
Queer rep: Basically everyone is pansexual; cultural third gender; f/f romance
Thoughts: This is book four in the Tales of Inthya series; it could be read as a standalone but would work best after reading Daughter of the Sun (book two). Although really you should read the whole series because it’s a delight. In this one, Crown Princess Ioanna of Xytae knows how ill-suited she is to her role; in a country that venerates the war goddess Reygmadra over the rest of the Ten, Ioanna has a peaceful disposition, an aversion to weaponry, and a different god’s blessing. When news reaches the capital of the emperor’s death in his war of aggression, Ioanna’s sister Netheia – who has both Reygmadra’s blessing and their father’s bloodthirstiness – drives Ioanna out of the capital. Caught up in the coup is Princess Vitaliya, who was visiting the Xytaen court to avoid a tense family situation back home in Vesolda. Vitaliya has no interest in her own country’s politics, let alone those of Xytae, but she’s used to traveling and leaving unpleasant situations in a hurry, and she can hardly leave Ioanna to die. Ioanna needs to get to safety, consolidate supporters, and retake the crown to prevent Netheia from continuing their father’s war and driving Xytae into the ground in the process. Vitaliya should get out as soon as Ioanna is safe – getting caught in a civil war is not on her to-do list – but as she and Ioanna bond on their travels, Vitaliya is increasingly unwilling to leave. This is another entertaining installment in the series. Ioanna and Vitaliya are very different characters and I liked the contrast between their voices a lot. This also explores some more of the theology and mythology of the world, as well as hinting at a supernatural threat yet to come (dun dun dun).

~Bonus books: Anya and the Dragon and Anya and the Nightingale by Sofiya Pasternack (middle grade fantasy) have a secondary bi character (hinted at in book one, explored in book two)
If you enjoyed this post, please consider tipping me on Ko-Fi!