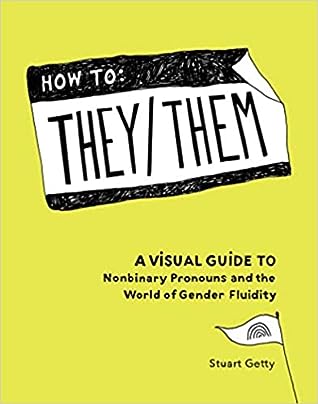 I received a copy of How to They/Them from the publisher via Netgalley in exchange for an honest review.

How to They/Them: A Visual Guide to Nonbinary Pronouns and the World of Gender Fluidity by Stuart Getty is a heavily-illustrated introduction to nonbinary pronouns (specifically they/them) and nonbinary and transgender identities more broadly.

How to They/Them starts with a brief autobiography about Stuart Getty and how they came to understand their gender identity and adopt the pronoun “they”, before moving into the meat of the guide. It’s done in a very accessible way, with a lot in an easily-digestible Q&A format with numerous cartoons, drawings, and graphs to illustrate and expand on various points.

Topics covered include the purpose of nonbinary or non-gendered pronouns, the most commonly used ones, and a little of the history behind them; the definitions of and differences between sex, gender, and sexual orientation; a discussion of the grammar of singular they; gender-neutral forms of or substitutions for common words; some “do”s and “don’t”s; assorted “fun stuff” like gender fluidity in history, the creation and development of the LGBTQ acronym, and some famous nonbinary people; and some “not so fun stuff” like issues trans and nonbinary people tend to have with, for example, the TSA and traveling, doctors/medical care, and legal vs chosen names.

It contains a lot of information, but the format keeps it from being overwhelming. It’s also unique among this type of book in that it’s really written for a mix of audiences; usually this genre tends to be written either entirely for cis people to educate themselves, or entirely for trans people to relate to, while this contains sections aimed at both audiences.

I do have a bit of a quibble with some of the framing, though, specifically the repeated assertion that “they is a transgender gender identity”. “They” in and of itself isn’t a gender identity; it’s a pronoun. It’s a pronoun that generally (but not always) indicates a transgender or nonbinary identity, but it’s not itself an identity. Some they-using people joke about being referred to as “a they”, but I haven’t come across anyone who uses it that way seriously, and I felt like that statement might end up confusing people.

Aside from that quibble, I’d say this is one of the most engaging books I’ve read on the topic, with a good mix of information and entertainment. Recommended.

How to They/Them by Stuart Getty