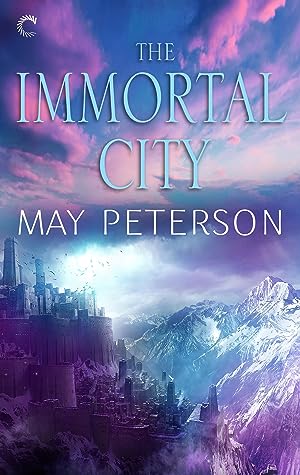 received a copy of The Immortal City from the publisher via Netgalley in exchange for an honest review.

The Immortal City by May Peterson is an adult fantasy romance and the second book in The Sacred Dark series. Despite being in a series, The Immortal City can be read as a standalone, as it focuses on different characters in a different part of the world than book one, Lord of the Last Heartbeat.

The titular immortal city is Serenity, an isolated mountainside city occupied primarily by the living-again: those returned from death by a noble spirit and granted immortality, shape-changing, and supernatural gifts. Some mortals travel to Serenity to die, hoping to be reborn in the immortal city, but the city has a dark side: it’s tightly, violently controlled by a crow-soul with the ability to take memories.

Ari, a reborn dove-soul with healing powers, remembers nothing of his mortal life and is tormented by that absence. What was in his past that compelled him to sell his memories? And how can he be sure that he agreed to give up everything that was taken? Disconnected from his sense of self, Ari drifts along the edges of Serenity society until a mysterious mortal draws his attention.

Hei has come to the immortal city for his own reasons, but Ari is drawn to him from the moment their paths cross. As their bond deepens, Ari’s desire to restore his memory becomes more urgent, and it seems their purposes might entwine: Hei knows how to find an ancient immortal who may be able to return Ari’s history to him – a history Hei already knows.

This is a really lush fantasy, with evocative description and an almost stylized writing style. There are layers to everything, and because of that the beginning might seem a little dense or difficult, but as the story unfolds it becomes well worth it to persevere. This is a dark fantasy that explores the seedy underbelly of the city and the trauma in the characters’ pasts and presents, but it manages to do so without becoming grim. The relationship between Ari and Hei is a complex one and I enjoyed seeing it develop as Ari shifts from seeing Hei as just another fragile mortal tourist to a full-fledged person with his own objectives and secrets.

I liked this a lot.

The Immortal City by May Peterson