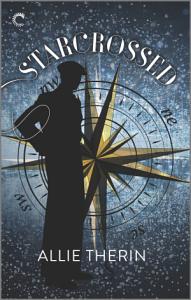 I received a copy of Starcrossed from the publisher via Netgalley in exchange for an honest review.

Starcrossed by Allie Therin is the second installment in the historical fantasy series Magic in Manhattan, following 2019’s Spellbound. (And it’s essential that you read Spellbound first!)

Set in New York City in 1925, Starcrossed centers around Rory Brodigan, a psychometric – with the paranormal ability to see an object’s past – and Arthur Kenzie, a wealthy politician’s son who is working to keep the everyday world safe from supernatural relics. Their paths crossed when Arthur needed help with a dangerous relic on its way to NYC, and despite misunderstandings, magical mayhem, and Rory’s prickly pride, they fall for each other.

Now, they’re trying to build their relationship while facing the obstacles of a homophobic society, Arthur’s relative celebrity, a stark class difference, and Rory’s developing powers. Oh, and another relic has gone missing…

This is a strong continuation to the series. Everything I enjoyed from the first book was back – the rich setting, the detailed magic system, the snappy dialogue and well-rounded characters – and was built upon. Therin nicely balances the historical elements with the fantasy ones and deftly weaves together the paranormal plot threads with the romantic ones.

There’s a fully-fleshed out supporting cast as well, and I really liked seeing how different types of relationships – like Rory’s adoptive familial relationship with Mrs Brodigan, or Arthur’s friendship and partnership with Jade – are given as much weight and value as Arthur and Rory’s romantic one. Even the antagonists are compelling, with good backstories and motivations that make sense…even if I don’t agree with them, I can see where they’re coming from, and that makes for an infinitely more engaging and satisfying story than a simple good/evil dichotomy.

I’m definitely eager to see how it all wraps up!