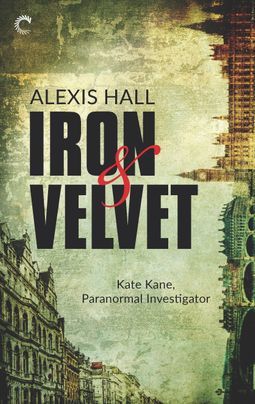 received a copy of Iron & Velvet from the publisher via Netgalley in exchange for an honest review.

Iron & Velvet by Alexis Hall is an adult urban fantasy/mystery, the first in the Kate Kane series. This edition is “newly refreshed by the author”; I haven’t read it previously, so I’m not sure how much of a difference there is between this and the older editions.

Iron & Velvet is written like a hardboiled detective novel, with a hard-drinking, sarcastic private eye, who quips “I like my women like I like my whiskey: more than is good for me.” This is PI fiction with a twist, though, since Kate differs from the typical PI in several ways: she’s a woman; she’s a lesbian; and, oh yeah, she’s half-fae and her private eye practice focuses on the paranormal.

The current case sees Kate working for Julian Saint-Germain – one of the four vampire princes – after a werewolf is found murdered outside one of Julian’s bars. Kate takes the job against her better judgement, and soon finds herself trying to prevent an all-out war between the werewolves, the vampires, and the mages… while navigating a very-bad-idea romance with Julian.

I liked this a lot. The tone and the humor was right up my alley – I will never say no to a snarky main character – and the mystery element was done nicely, with some red herrings and false leads but not so many as to slow down the pace. There’s a large supporting cast and there’s one or two spots where enough people were introduced all at once that I got a little confused about who was who, but overall that wasn’t a problem because all the recurring characters are well-developed.

I definitely plan to keep reading this series, and the next book, Shadows & Dreams, is being re-released in a newly revised edition on December 2nd!