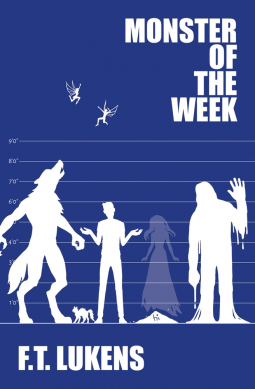 I received a copy of Monster of the Week from the publisher via Netgalley in exchange for an honest review.

Monster of the Week by F.T. Lukens is the second book in The Rules young adult fantasy series, following 2017’s The Rules and Regulations for Mediating Myths & Magic.

I’ll try to avoid spoilers for book one in this review, but be aware that you absolutely need to read Rules and Regulations before this one! The story picks up right where it left off, so the background is necessary. Also, Rules and Regulations is a ton of fun and you should read it anyway!

The series follows the misadventures of high school senior Bridger Whitt, who stumbled into the world of myths while looking for a job to earn money for college. Bridger has adjusted to his newfound knowledge of unicorns, pixies, ghosts, and werewolves, and he takes his role as assistant protector of the supernatural seriously.

But Bridger is also a walking disaster.

Everything he tries to do seems to backfire on him, and that becomes abundantly clear when a monster-hunting television show arrives in town to film their new season after hearing about all of the strange events that happened in the fall. Bridger’s attempts to get the show to leave town only makes the host more sure that he’s hiding something. The investigation ramps up in alarming ways at the same time Bridger is panicking about life after graduation, dealing with the return of his estranged father, and hearing rumors about “breakup week”, where all the senior couples split between prom and graduation.

Can Bridger keep the myth world safe, keep his boyfriend, and keep on track to graduate?

Monster of the Week features the same humor and hilarity as Rules & Regulations, but also deals with some serious topics, such as toxic family relationships, panic attacks, and homophobia. It’s not dark or grim by any means, but it wasn’t quite as fluffy as the first book. Bridger is such a fun character, though, and the supporting cast is equally awesome. I hope Lukens continues to add to this series; I can already picture Bridger flailing his way through college!

Monster of the Week by F.T. Lukens

One thought on “ARC Review: Monster of the Week”