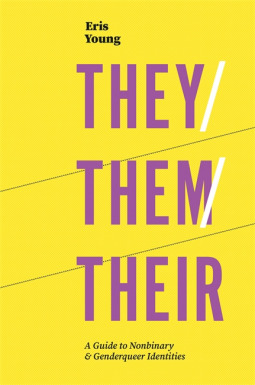 I received a copy of They/Them/Their from the publisher via Netgalley in exchange for an honest review.

They/Them/Their by Eris Young is a nonfiction guide to nonbinary and genderqueer identities. On the nonfiction accessibility scale from pop-nonfiction to academic works, this is definitely closer to the academic end; it is written for the layperson rather than the academic audience, but it does tend toward the denser side of things. That is not a criticism, mind; I personally found They/Them/Their to be a nice mix of in-depth information combined with a clear and concise writing style, but I can see being thrown off if you were expecting something lighter.

They/Them/Their is broken up into seven main sections, plus a thorough introduction: language, history from a global perspective, community, wider society, mental health, medicine, and the law.

I personally was most interested in the language, history, and community sections; I have an unabashed fascination for linguistics, grammar and the politics of grammar, foreign languages, and the like. Learning a language with a grammatical gender was actually one of the catalysts of my gender-questioning journey and I loved reading about how nonbinary people are trying to carve out a place for themselves in heavily gendered languages.

The medical and legal sections, while interesting, suffered a bit in my opinion because they were necessarily limited to a particular context (the current UK medical and legal system). I think perhaps that’s a spot where the more academic nature of the work was a hindrance, since it focused on one country at one point in time, making those sections the most likely to quickly become outdated.

It might have been better to take more of a general, survey view of those sections and give a broad overview of nonbinary medical and legal status around the world, or even take a thought-exercise approach and look at what would be ideal for nonbinary people in terms of medical treatment and legal recognition and what would need to be done to create such an ideal.

That’s a minor quibble, though, and I’m sure if I were a UK resident I would’ve found them more relevant. Overall, I thought They/Them/Their did a great job of combining a wide-ranging, accessible introduction to nonbinary identities with a more in-depth analysis of certain aspects.
Book Details

One thought on “ARC Review: They/Them/Their”