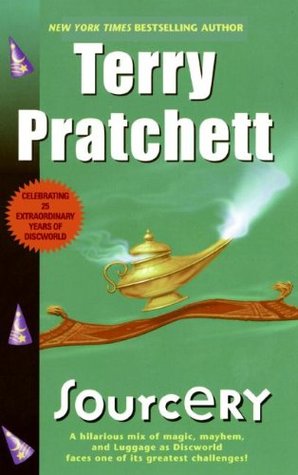 This is the first month I’ve joined the Discworld Readathon, which is up to book five: Sourcery. I was supposed to post this review yesterday, but… I didn’t actually get around to reading the book until today! Whoops.

I’ve read a lot of Discworld, but I hadn’t previously read Sourcery. I think that was because I wasn’t wild about the other Rincewind books compared to some of the other Discworld sub-series.

But this had Death in it, and the Librarian, so why not give Rincewind another try? The premise seemed promising: “Once upon a time, there was an eighth son of an eighth son who was, of course, a wizard. As if that wasn’t complicated enough, said wizard then had seven sons. And then he had an eighth son – a wizard squared (that’s all the math, really). Who of course, was a source of magic – a sourcerer.”

And I particularly enjoyed this little exchange on page six:

“I meant,” said Ipslore, bitterly, “what is there in this world that makes living worthwhile?”

Death thought about it.

Hard to argue with that. (Although our former stray presented me with a decapitated mouse yesterday, so…).

I have to say, after finishing this, I can conclude that Rincewind is just never going to be my favorite character and his sub-series is never going to be one of my favorites. This book had the trademark Terry Pratchett humor and I did smirk on several occasions, but the plot itself fell a little flat for me.

I liked different scenes in the book quite a lot, such as the Luggage’s marauding, the misadventures with the genie, and the Four Horsemen of the Apocralypse (the Apocryphal Apocalypse) in the bar, and I also thought Nijel was funny, but overall… this was just OK in my opinion.

Of course, with Discworld, even the OK books are still pretty good. But this is not one I’d recommend people start with.

Other Sourcery participants are Book Beach Bunny, Confessions of a Serial Reader, Meeghan Reads and Bakes, and Didi Oviatt