Bite-sized reviews of the LGBTQ books I’ve read in the past week. All titles are linked to their Goodreads page. 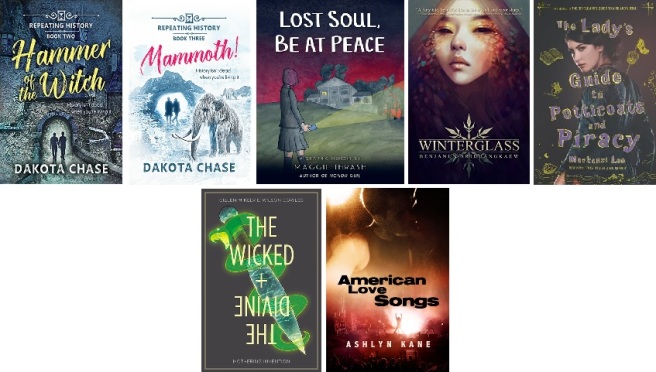 Hammer of the Witch (2018) and Mammoth! (2018) by Dakota Chase
Genre: fantasy
Audience: young adult
Queer rep: Both MCs are gay
Thoughts: Books two and three of the Repeating History series, which is basically The Magic Treehouse with gay teenagers. I read the first book several weeks ago and it was fun, although it was a very young-feeling YA. I wanted something light, so I picked up the next two titles. And then I really disliked Hammer of the Witch, which is set in the Dark Ages. It seemed to have all the problems of the first book, such as characters not acting their age and repetition in dialog/rehashing plot points, without any of its charms. The POV switched between Ash and Grant and I had so much trouble distinguishing their voices I had to keep reminding myself whose perspective I was getting. After struggling through Hammer, I nearly didn’t read Mammoth!, but I had it checked out so I persevered. And… I enjoyed it. There was actual character development!! I could distinguish between POVs! The story was less grim! (They’re in the Ice Age in this book, if you couldn’t guess).

Lost Soul, Be At Peace by Maggie Thrash (2018)
Genre: fantasy/memoir?/graphic novel
Audience: young adult
Queer rep: Thrash is a lesbian
Thoughts: I really liked Thrash’s graphic memoir Honor Girl and was very excited to see she had a new book out set a year and a half after Honor Girl. But… I had mixed feelings about this. The summary seemed to imply this was another graphic memoir, but it had a very strong fantasy or magical realism element to it that left me a little confused as to the genre and as to what exactly was going on. I think if I had gone into this expecting it to be a novel I would’ve enjoyed it more.

Winterglass by Benjanun Sriduangkaew (2017)
Genre: fantasy
Audience: adult
Queer rep: The MC is bi or lesbian, the most important secondary character is a trans woman, many characters are nonbinary (various pronouns), many same-sex relationships
Thoughts: This is maybe strictly speaking a Snow Queen retelling but it’s such a loose adaptation that I think it’s better to say it’s its own story, inspired by the Snow Queen. This is technically a novella, I think, but the writing is so dense and lyrical there is a lot packed into its 130 pages. I loved the rich cast of characters and how nearly everyone was queer and no one’s identity was explained or commented on because it was all so commonplace. My big complaint is the ending. It just kind of stopped. Which would be okay if there were a sequel but there doesn’t seem to be, so everything is kind of left hanging.

The Lady’s Guide to Petticoats and Piracy by Mackenzi Lee (2018)
Genre: historical fantasy
Audience: young adult
Queer rep: The MC is asexual and maybe aromantic, secondary characters are gay, bi, and lesbian
Thoughts: The sequel to The Gentleman’s Guide to Vice and Virtue, where Monty’s sister Felicity takes center stage. Like in Genteman’s Guide, this book starts off like a standard historical fiction story before a fantasy element comes into play about midway through. I was very taken aback by that switch in Gentleman’s Guide, but as I was expecting it in this one it wasn’t so jarring for me. I enjoyed this book a lot, although I found Felicity a bit grating at points – there were also points where I quite liked her, and the supporting cast was strong. If Lee writes more books about these characters, I’ll keep reading them.

The Wicked + the Divine, Vol. 7: Mothering Invention by Kieron Gillen, Jamie McKelvie, Matt Wilson (2018)
Genre: fantasy/graphic novel
Audience: adult with young adult appeal (rated M)
Queer rep: A lot. Various characters are gay, bi, lesbian, asexual, and trans, and probably some other identities as well.
Thoughts: This collects issues 34-39 of The Wicked + The Divine and it is the penultimate volume of the series and I am so excited to see how everything will wrap up but also so disappointed this series is wrapping up because it is so good! This volume is fairly epic in scope and there are some really cool art/layout features. The summary succinctly states: “In the past: awful stuff. In the present: awful stuff. But, increasingly, answers.” It neglects to mention that it is also bringing up even more questions! But on the other hand, I am probably the least confused I’ve ever been while reading this series. When the final volume comes out I’m definitely going to need to sit down and read the entire series all at once.

American Love Songs by Ashlyn Kane (2010)
Genre: fiction/romance
Audience: adult
Queer rep: The MC and LI are gay
Thoughts: This was surprisingly engaging. The voice is catchy and I liked the way it was framed, with the prelude, first movement, interlude, etc., since it went really well with the music theme. This was a lot of fun, had some emotional depth, and was a nice bit of escapism – a good book to read while trying to ignore the fact that the world is continuing to fall apart around us.

One thought on “Rainbow Reading: October 24”