My thoughts on the LGBTQ books I’ve read in the past week. All titles are linked to their Goodreads page. 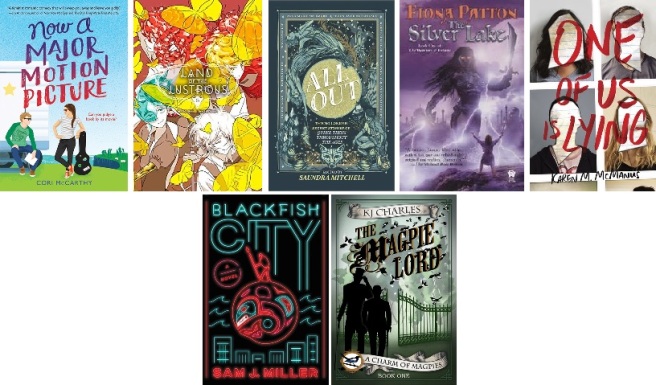 Now a Major Motion Picture by Cori McCarthy (2018)
Genre: contemporary
Audience: young adult
Queer rep: a secondary character is pansexual and ends up in a same-sex relationship
Thoughts: This was incredibly fun. Really enjoyable and an easy read; I flew through it. I liked all the little different threads that wove in and around the main premise and the way serious themes were seamlessly blended in with the fun stuff. Note: Since this was linked from the “every ace character” masterpost on JellyFable, I feel like I should point out that I did not realize at all that the MC was demisexual. That may be because I am very oblivious or because the rep was not that clear. I honestly cannot say which it is. But regardless, I enjoyed this book a lot.

Land of the Lustrous, Vol. 5 by Haruko Ichikawa (2018)
Genre: fantasy/manga
Audience: young adult
Queer rep: the Lustrous are all agender
Thoughts: This manga series has great world-building and each volume gets me more invested in its mysteries. I do wish the art was a little more distinct. There was a gap between me reading the first four volumes and this one (which is newly out in English) and I lost the knack of differentiating most of the characters!

All Out by Sandra Mitchell (ed.) (2018)
Genre: short stories/historical
Audience: young adult
Queer rep: varies across stories; main characters are gay, lesbian, trans, asexual
Thoughts: This is an anthology of “the no-longer-secret stories of queer teens throughout the ages”. Some are historical fiction, some are historical fantasy; they’re all set in the past and they’re all queer. And they’re all good! There weren’t any stories I disliked and only one or two that I thought were just OK. I was already familiar with most of the contributing authors but a few were new to me and I plan to look up their other work.

The Silver Lake by Fiona Patton (2005)
Genre: fantasy
Audience: adult
Queer rep: Two important characters are gay, a number of secondary characters are bi-gender (in-universe term)
Thoughts: This was my kind of book! Interesting high fantasy with well-developed characters, gods, prophecies, gray morality, casually queer characters, and no romantic focus. I enjoyed this immensely. It’s book one in the Warriors of Estavia trilogy and of course my library system doesn’t have the rest of the series, but I’ve put in ILL requests for them!

One of Us Is Lying by Karen M. McManus (2017)
Genre: contemporary/mystery
Audience: young adult
Queer rep: One of the POV characters is gay, as is a secondary character
Thoughts: I had trouble getting into this, to the point where I nearly gave up on it, but I was curious enough about the murder to keep reading and I ended up getting very drawn into the book. It was a page-turner and I did like it overall although there were parts of it that fell flat for me.

Blackfish City by Sam J. Miller (2018)
Genre: sci-fi
Audience: adult
Queer rep: One of the POV characters is gay; one of the POV characters is nonbinary; the two most important non-POV characters are lesbians; several secondary and minor characters are gay
Thoughts: This was great. I loved the world-building and the way all the little plot threads ended up weaving together into an overall picture that was so clear in retrospect but that I didn’t see coming at all. Loved the casual queerness, loved that Soq used they/them pronouns and all the other characters used those pronouns for them and it was so natural and normal. Loved the polar bear. Loved everything. Read this book.

The Magpie Lord by K.J. Charles (2013)
Genre: historical fantasy/romance
Audience: adult
Queer rep: The two main characters are gay
Thoughts: I liked this much more than I was expecting to. This series gets raved about a lot, but the back copy had me expecting a standard fantasy romance. Well, the romance elements are definitely there but IMO the fantasy/mystery plot is really the focus, which is what I prefer. I also really enjoyed the characters and their interactions, and not just the two MCs – Crane’s assistant Mr. Merrick was great. I’ve put book two on hold.

One thought on “Rainbow Reading: April 25”